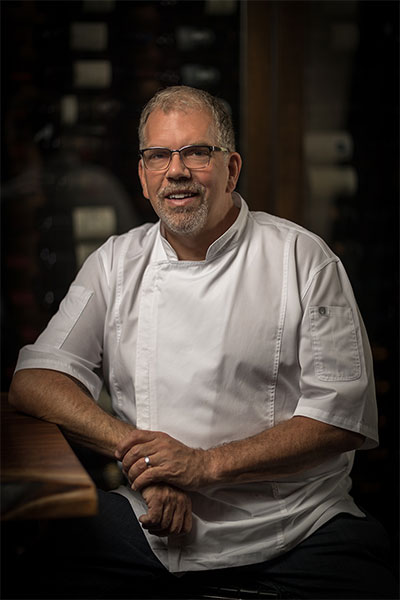 One of the featured chefs for the Bush 2001 Inaugural Ball.

Chef Rathbun has appeared on:

Celebrity Chef Kent Rathbun has been a respected leader in the Dallas restaurant scene for three decades. The extraordinary dining experience and unforgettable menus that he creates have attracted both local and national acclaim.

Kent’s interest in cooking started at a young age. In high school he became an apprentice at La Bonne Auberge, a five-star French restaurant in Kansas City, where he began his journey into fine dining and service. Rathbun continued to refine his skills as he worked with some of the most creative culinary teams in the country including Mr. B’s in New Orleans, The Mansion on Turtle Creek, and the Landmark Restaurant and the historic Melrose Hotel in Dallas. Kent then opened the Seventeen Seventeen Restaurant in the Dallas Museum of Art where he also operated Dani Catering where he turned off-site events into a full-service fine dining experience.

In 1997, Rathbun decided to take his culinary vision to the next level by creating Abacus, a world-class fine dining concept in the heart of Dallas’ uptown district. Opening in October of 1999, Abacus quickly received recognition as a crown jewel of fine dining locally and on the national scene as well. Most notably, Abacus was inducted into the Nation’s Restaurant News Fine Dining Hall of Fame, consistently earned Forbes Four-Stars and AAA Four Diamonds, was named “One of the Top Meals Around the World” by USA Today, and a “Top Pick” by Bon Appetit Magazine.

Rathbun realized early on that diners were hungry to enjoy backyard favorites with an upscale twist. With this modern outdoor approach, he developed his next restaurant concept Jasper’s, which quickly became a favorite and expanded to multiple locations in Texas. Jasper’s was named one of the Top 20 Best New Restaurants in America by Esquire Magazine, won Nation’s Restaurant News Hot Concepts! Award, and the ribs were named Top 3 in the US by Bon Appetit Magazine and the Food Network..

Rathbun continued to expand his culinary repertoire with two other restaurant concepts, Hickory and Rathbun’s Blue Plate Kitchen. He also continues to operate a sizable catering business which is now known as Catering by Chef Kent Rathbun.

Over the years, Rathbun’s flourishing concepts in restaurants, catering operations, and event hospitality have generated high demand for celebrity chef appearances. He has cooked at the prestigious James Beard House in New York on many occasions and is a four-time James Beard Foundation nominee for Best Chef in the Southwest. He has made several appearances on The Food Network, the CBS Early Show, the Today Show on NBC, the Rosie O’Donnell Show, and as a competitor on “Iron Chef America”— defeating grill master Bobby Flay in an intense culinary clash. Not to mention, he was the featured chef for the George W. Bush 2001 Inaugural Ball.

Chef Rathbun had the opportunity to make annual trips to Bangkok, Thailand, with Dusit Thani Hotel to teach their chefs how to cook “American” food and also learn about Thai and other Asian cuisines. His love for the cuisine has always been seen throughout his career and prompted him to open his latest concept, Imoto in 2018. Located in the famed Victory Park, in Downtown Dallas, Imoto is a Pan-Asian restaurant with creatively curated modern decor and an inviting upstairs lounge and private dining room.

It’s important to Rathbun to connect with the community by participating in local and national charities to help raise money. He is the lead chef for the March of Dimes Signature Chef Event and participates in other culinary events that benefit the North Texas Food Bank, the American Cancer Society, and the American Heart Association. Nationally, he has been the chef representing Dallas Cowboys at the “The Taste of the NFL” since 2001 and has done numerous food and wine festivals around the country and internationally.

Rathbun lives in Dallas with his two children and wife, and fellow restaurateur, Tracy Rathbun. They co-own local Dallas favorites Shinsei, Lover’s Seafood & Market, and Catering by Chef Kent Rathbun. He enjoys spending time cooking as a family; a Rathbun family tradition that no doubt will carry on for generations to come.